Part 1: Installation – How To Install And Set Up Koha For Schools

Koha, an integrated library system, is one of the best open source projects I know. We use it in our school and teaching materials library. It is used by many schools, universities and libraries all over the world. It has a lot of features and you can configure and customize it very flexibly. However, there is one disadvantage: If you have not had much to do with libraries up to now, the entry is rather steep, not so much in Koha, but in the bibliographic data format MARC21, which is why I would like to show in this series of articles how to install and set up Koha for schools.

The first part deals with the basic installation of Koha and the establishment of a first library.

This article is part of a series:

Do you want to install and set up Koha?

Koha is a web application so we need a web server. This can be your own computer, a virtual machine or a Linux container. In this example we will use an LXD container with Ubuntu 20.04, but any other computer with Debian or Ubuntu will work.

First we add the package sources and the corresponding key for Koha:

After that we have to update the package sources once:

Now we can install Koha and the database server:

To make our database server more secure, we can change some settings with the following command:

Except for the first question all questions can be answered with Yes (“Y”). A root password should be set!

Before setting up Koha, we need to make some basic settings in /etc/koha/koha-sites.conf. It is a question of determining the domain under which Koha and OPAC (the website where the user can search the library and login to their account) can be reached later. It is composed as follows:

To do this, we open the file and change the following parameters:

Afterwards we activate some web server modules, so that Koha can be reached later:

We can install a language package in this way (e.g. German):

Later, both the Web Installer and Koha are available in German. To list all available languages use this command:

With Koha we can create and manage multiple libraries. But so far there is no one, so we have to create one first.

If Koha should be accessible later at library.my-school.org, we have to use library as library name.

Next, activate the new configuration for the web server and restart it:

In order to reach the web installer we need to enter the IP and domain name either in our DNS server or locally in the hosts file. In Ubuntu it is located at /etc/hosts. The IP can be found out with ifconfig, for example.

The user is koha_libraryname. The password is obtained with the following command (adjust libraryname!):

In the next step we can select the language:

In the next steps, dependencies are checked, e.g. whether all Perl modules are available, the database tables are set up and a MARC format must be selected (MARC21 is the standard).

Then there is a longer page where we can fill the database with different templates and sample data. Here you have to decide what you want to have in the database. We select the following points in addition to those already marked: 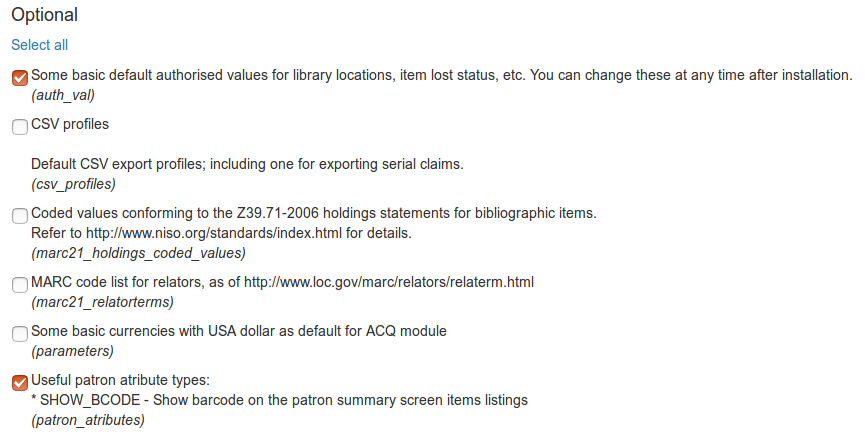 This completes the basic installation.

Set up Library and Initial Settings

Now we are asked what our library should be called. To do this, we define an abbreviation (cannot be changed later) and assign a name. Let’s call it School Library.

Next we will create a first user type. The admin account that we are about to create uses this type of user. Again we have to assign an abbreviation or code for the category (“S”), a description and the duration of the membership. The latter determines when a user account expires in this category.

Once the user type has been created, we create the administrator. This user has “Superlibraian” rights. All fields are mandatory. 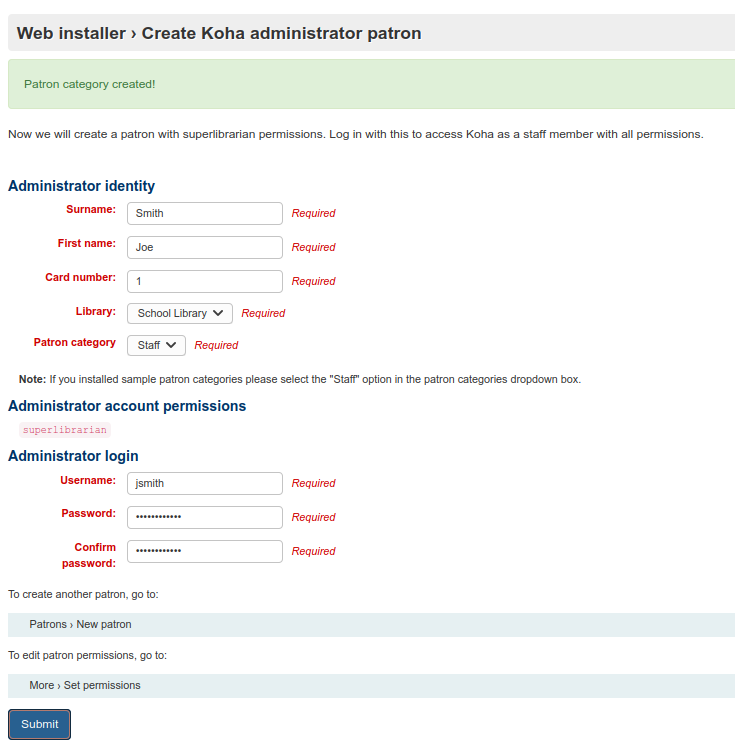 Now we define a first media type. These can be books, CDs, DVDs, cards, etc. Again, we need a code that can’t be changed later, and a description:

Finally, we determine the lending conditions for the newly created media type. The settings are very flexible. You can set the loan period or specify the library or user type for which the rule applies. We can change the rules later. For the moment we set “Current Checkouts allowed” to five, because we don’t won’t our students to loan more than five books at a time. 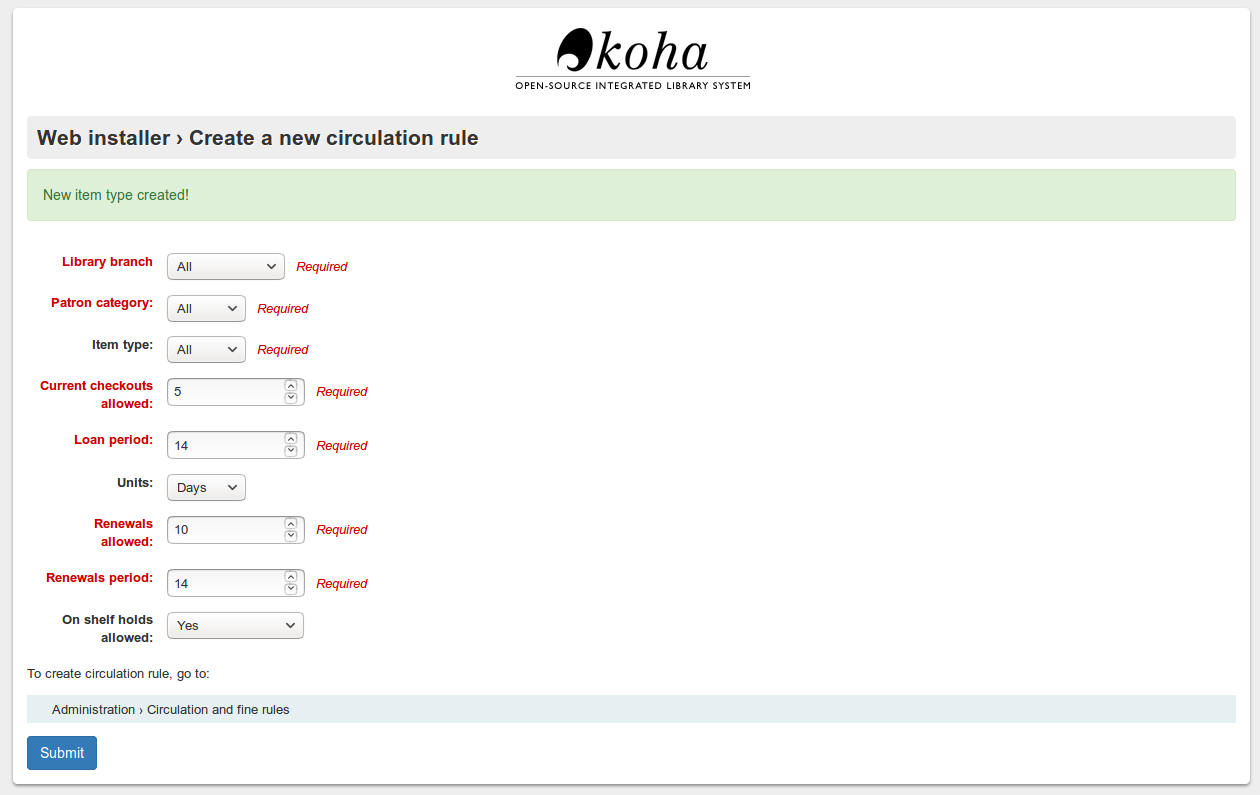 This completes the basic installation of Koha and our first library! At http://library-intra.my-school.org we can now log in with our admin account and have access to the administration page of Koha. There we make all further adjustments, check in or check out books. 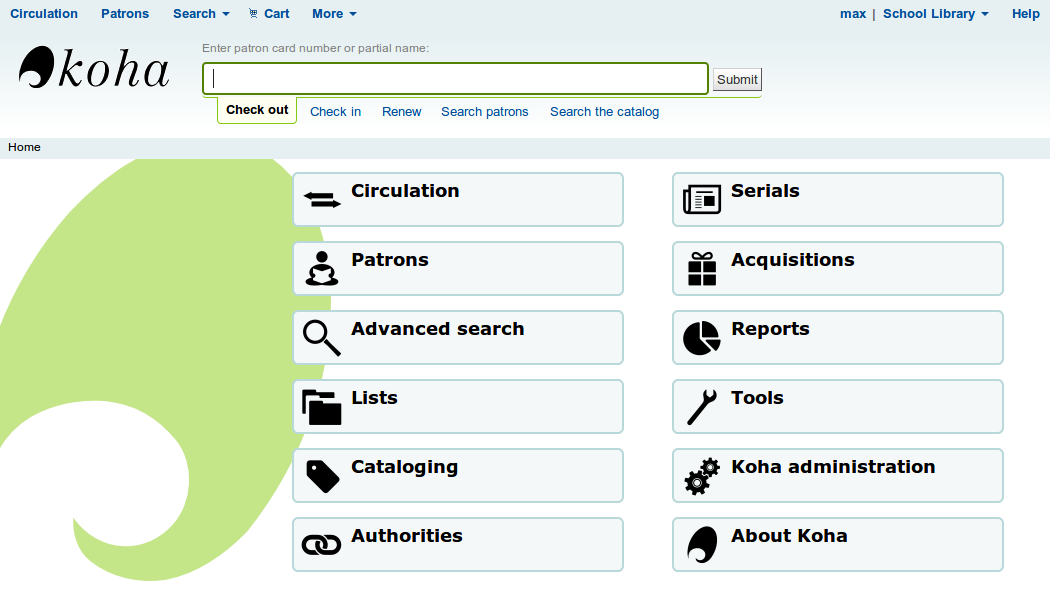 We now have a working Koha installation and a first library. Nevertheless, many other settings are necessary before we can add a record for our first book in Koha. I would like to show this in the coming articles of this series.

Looking for great Open Source Software for your classroom?

Sir,
I want to learn how to access OPAC from web. Recently we are accessing through LAN using IP Adress that is 192.168.1.xx. My koha is installed in Debian 9 which is Guest OS in Virtual Box , Hosted by Windows 7.

@Rajesh: Check the official install guide the appendix about IP vs. named-based installation. I think all you need to do is to add the DNS names to your windows hosts file. https://wiki.koha-community.org/wiki/Koha_on_ubuntu_-_packages#Appendix_A:_Named-based_vs._IP-based_installations

Very handy information on the setting up Koha ILS using Name Based setup. Thank you

I think that the posts are very quick for newbies. Could you please extend them a little. Othervies, great post!

[…] the first part of this series we have already installed Koha. Before we can record or loan a book, some settings have to be made. […]

[…] Installation and setup of a first library […]

[…] Koha is an integrated library system. It is used in public libraries, schools, and other libraries worldwide. We also converted our library to this software about 5 years ago. Koha has many features and is flexible in configuration. It’s a bit steep when you’re not a professional, but you’ll be rewarded with a great system. If you’d like to learn more about Koha and how it’s used in schools, check out this little blog post series. […]