In our school we have some computers, to which a projector is permanently connected. The projector is connected to an HDMI switch, so that you can switch easily between different inputs, e.g. your own laptop or document camera. Ubuntu extends the desktop by default when connecting a screen. But in our situation we want something different. The desktop of the computer should also be shown at the projector / TV. There are different ways to automatically mirror screens when an HDMI cable is plugged in. I would like to describe how you can use udev to solve this problem.

There are several places where you can start to mirror screens. I would like to list some of them briefly:

The question is: Is there a way to trigger an action when an HDMI cable is plugged in or unplugged (physically or via the HDMI switch)?

Yes! udev is a background service that takes care of that. It takes care of all entries below /dev/, i.e. hard disks, external media, USB devices and also graphics cards. When a cable is plugged in or unplugged, udev triggers an event to which you can respond with the help of an udev rule. But before we create such a rule, let’s take a look at what happens when a cable is plugged in or unplugged. We can use the udev management tool (udevadm) to do this.

If we now plug in or unplug the HDMI cable, we get the following output:

udev tells us here which device it is (“card0”), which action was triggered (“CHANGE”) and which subsystem is affected (“DRM”). We need this information immediately for our udev rule. We create these under /etc/udev/rules.d/95-hotplug-hdmi.rules:

There we insert the following line:

So we react to a “change” event in the subsystem “drm” and want to execute the script “/usr/sbin/setHDMIStatus” if this event occurs. The script writes the current state to a file. Actually you can write anything to the file, as long as the file changes when the status changes. Why? We will see in a moment. The script setHDMIStatus has the following content (change username, in case of linuxmuster.net you can use the account of the template user or local admin):

/sys/class/drm/card0-DVI-D-1/status is the path to the status of our HDMI port. In this case it is a DVI port.

Note: The script is a workaround because at the time of the udev event xrandr returns the status disconnected even though the cable was connected.

So far we have only managed to write the status (connected, disconnected) to a file. Now we want to monitor this file for changes and mirror the screens according to their status. For this we create the following script (e.g. with the name /usr/sbin/mirrorDisplays):

For the script to work, the inotify-tools must be installed and the script must be made executable.

The script monitors our created file (/home/user/.hdmi_status) and, if an HDMI cable is connected, triggers the xrandr command to mirror the screens.

Now the script only has to be defined as an autostart program so that it is started with the login. 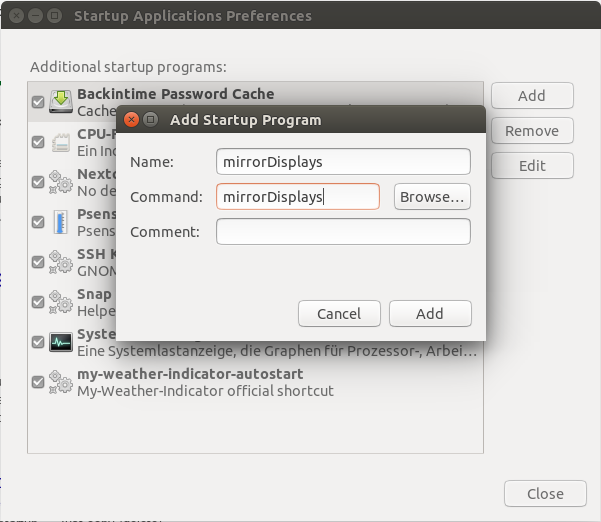 So far everything works quite reliably, even if we are still looking for a solution that is even more universal and doesn’t need a workaround with an extra file. If you have a suggestion, just give it to us 🙂

[…] most rooms, the screen is mirrored by default when a projector or screen is connected via a HDMI switch. In this specific case the colleague uses […]